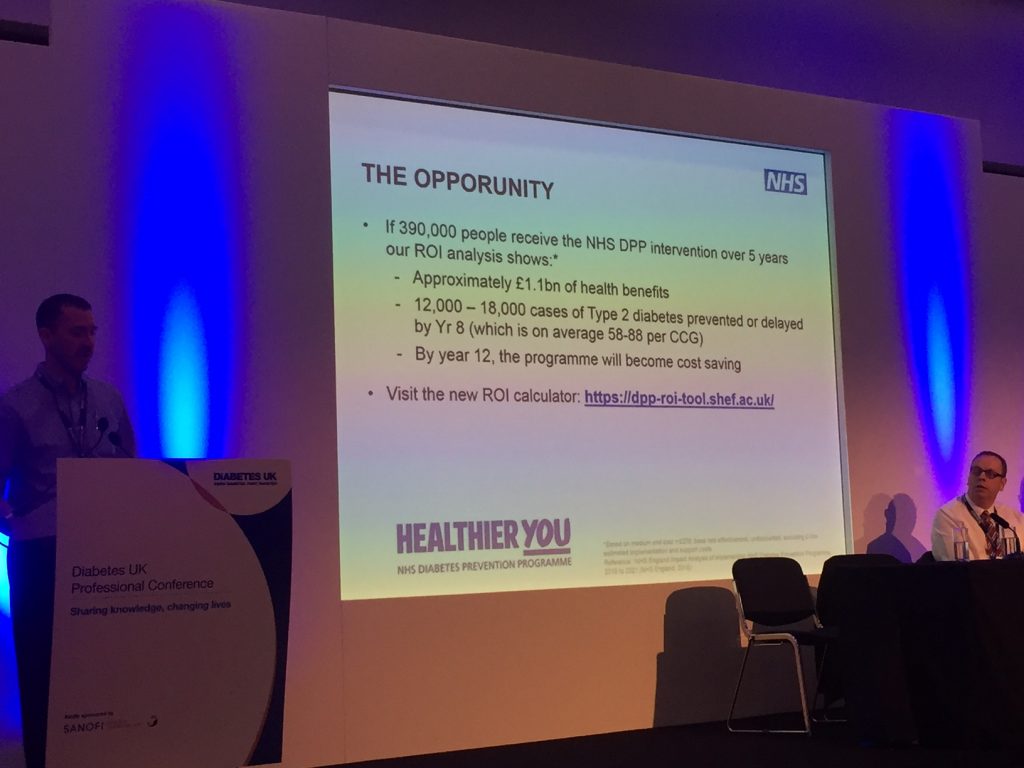 A national drive to prevent type 2 diabetes could help delay or stop up to 18,000 cases of the condition from developing over five years, it has been predicted.

The figures were unveiled by Matthew Fagg, the director of the Healthier You: NHS Diabetes Prevention Programme (NHS DPP), at this year’s Diabetes UK Professional Conference in Manchester.

During his presentation, Mr Fagg stated the initiative could also save £1.1 billion in health benefits and by year 12 would become cost saving.

The programme, which started in April 2015, was developed to identify those at high risk of type 2 diabetes and refer them onto a behaviour change programme.

There has been strong international evidence which demonstrates how behavioural interventions supporting people to maintain a healthy weight and be more active, can significantly reduce the risk of developing the condition.

The programme started in 2015 with a first wave of 27 areas covering 26 million people, half of the population, and making up to 20,000 places available. This will roll out to the whole country will take place by 2020 with an expected 100,000 referrals available each year after.

Mr Fagg said the demonstrator sites started with an uptake of 20 per cent, but that has since increased to 60 per cent.

He also provided very early outcomes from two of the demonstrator sites which indicated there has been an overall weight change of -2.5 kg over six to 12 months.

At the follow-up sessions 75 per cent of people had lost weight and the average weight loss was 4.2kg.

Mr Fagg said: “In nine months we’ve started to see the step-change in the way that people at risk are supported to change their heath.”

Martin Cassidy, who is the network quality improvement manager for the East Midlands Cardiovascular Disease Network, spoke about his experiences of rolling out the programme in his region.

He explained how the whole message was based around how 52,265 people across the East Midlands had developed diabetes in the last five years and unveiled the press coverage he had managed to generate.

He also provided information about Diabetes Prevention Week, which was held across his region and was used to raise awareness of both the programme and type 2 diabetes. Mr Cassidy said: “The press really took on board the messages we were putting out there.”

Being the second largest demonstrator site, Mr Cassidy also shared lessons they have learnt during the process, which included avoiding summer referrals as many people are away, suggesting incentifying GP practices and avoiding telling patients the programme was a nine month commitment.

Professor Jonathan Valabhji, the national clinical director for obesity and diabetes for NHS England, also spoke at the presentation, where he gave a broad background summary as to why the programme was introduced in the first place.