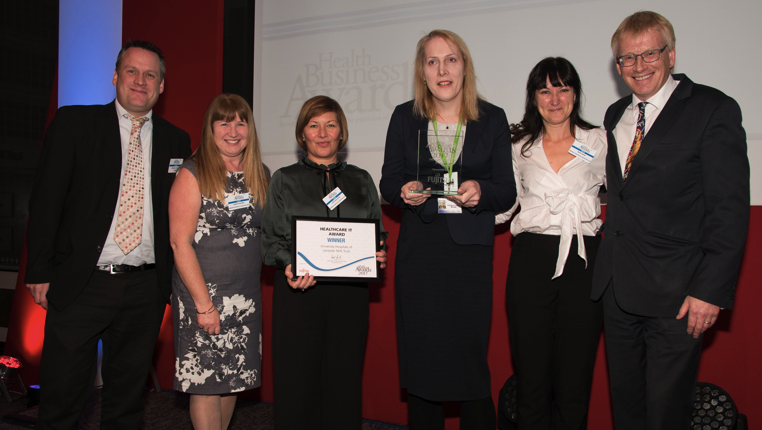 A team that provides organisations with staff training so they can transform diabetes care has won a major award.

Staff from the Effective Diabetes Education Now (EDEN) programme have been named the winners of the Healthcare Information Technology prize at this year’s Health Business Awards.

The glittering ceremony was held at London’s Grange Hotel and was presented by The One Show’s Dr Phil Hammond.

EDEN Lead Laura Willcocks, a senior research associate at Leicester’s Hospitals, said: “I am absolutely so proud of the team, to have been recognised by such a prestigious award ceremony is amazing.

“Everyone works so hard and it’s fantastic that we could come back to Leicester with the news that we’d won.”

EDEN education support manager Petra Jones added: “I’d like to take this opportunity to thank Laura, my manager, for her continued encouragement of cutting-edge innovation and technology within diabetes education. It’s nice to have some recognition for my work as part of the wider EDEN team.”

The awards have an established reputation for showcasing the success stories in the health sector. They were launched to recognise significant contributions made each year by organisations and individuals that work inside and alongside the NHS. There were 19 award categories focusing on facilities, specialisms and innovation.

This is the second award win for the EDEN team this year, which also scooped a Health Service Journal (HSJ) 2017 Value in Healthcare Award in the Training and Development category.