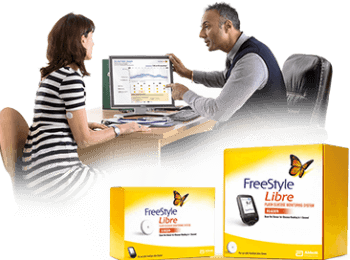 Using the FreeStyle Libre for a year reduces diabetes-related sick days and hospital admissions by a third, according to new research.

The wearable flash monitor,  which allows people with diabetes to track their blood sugar levels without having to prick their fingers, also leads to fewer and less severe hypoglycemic episodes.

The study carried out in the Netherlands also found the pioneering device is associated with a significant decrease in HbA1c, with the most pronounced improvement in people with the worst metabolic control.

The trial, led by Professor Dr Henk Bilo of the Isala hospital, involved 1,365 people with either type 1 or type 2 diabetes who were asked to use the FreeStyle Libre for 12 months.

The researchers said: “In our opinion, the reported effect of less hypoglycemic events combined with a neutral effect or a (slight) decrease in HbA1c is significant and relevant from a user point of view.”

They think their findings might change the focus of research and clinical practice in the future.

“HbA1c levels decreased, while, according to their own reporting, patients experienced a lower absenteeism rate, and less diabetes-related hospital admission rates.

“Furthermore, they reported less and less severe hypoglycemias and a more active role toward treatment and treatment changes.

“Of course, these outcomes should not all be taken at face value. Acknowledging the several limitations of this study, in our opinion the results are still convincing enough to allow the general conclusion that the FSL-FGM is a valuable addition to treatment options for specific target groups of patients with diabetes, irrespective of the type of diabetes.”