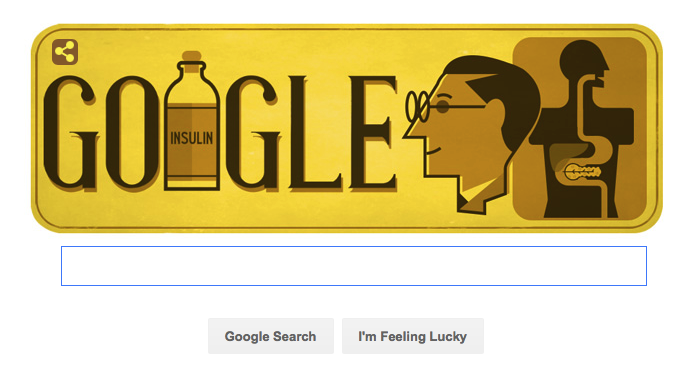 The search engine giant Google has marked the 125th birthday of Sir Fredrick Banting’s birthday by changing its iconic homepage to a commemorative picture of the scientist.

Sir Frederick was Canadian and is best known for his pioneering work using insulin to treat diabetes, which earned him the Nobel Prize.

It was because of his groundbreaking discovery in helping to treat diabetes that his birthday became the official date for World Diabetes Day.

Sir Frederick served in the First World War despite initially being refused while in medical school for poor eyesight since the army wanted more doctors on the front line.

But it was only after the war that he developed a deep interest in diabetes and the pancreas.

Scientists, including Edward Schafer, had previously speculated that diabetes was caused by a lack of a protein hormone produced in the pancreas, which Schafer had named insulin.

Previous studies had noted that people with the condition had a damaged pancreas.

Sir Frederick decided to investigate the issue more and was given 10 dogs to practise on. He tested out the theory by removing the pancreas from one dog, which resulted in the animal getting diabetes.

On another dog he removed the organ, but ground it up and created an injection, which was then injected to the dog and helped keep it healthy.

The findings were finally put into practise in 1922 when a 14-year-old boy named Leonard Thompson became the first person with diabetes to be treated with insulin, and ended up recovering rapidly.

The discovery of the drug was seen as a miracle, saving millions of lives and contributed to Sir Frederick winning the Nobel Prize in Physiology or Medicine in 1923. He was also knighted by King George V knighted in 1934.