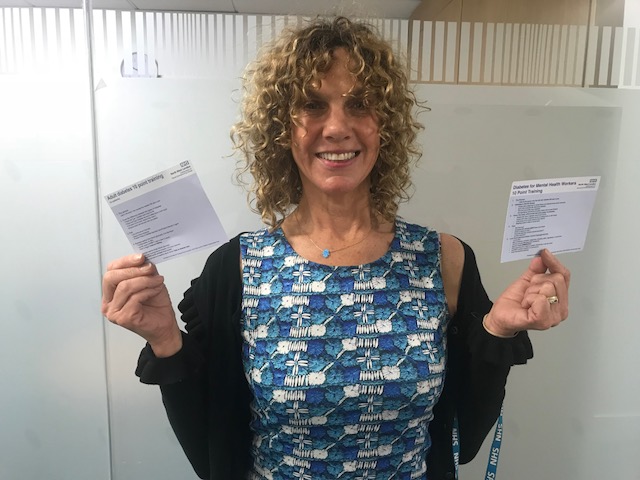 The force behind Diabetes 10 Point Training has said diabetes is so prevalent that we have a shared responsibility to know about it.

Highly respected Lead Diabetes Nurse Ruth Miller developed the innovative training resource to help clinicians involved in giving care to people with diabetes and it has been accessed by thousands of frontline staff.

During the latest interview for The Inpatient Podcast by the UK Diabetes Inpatient Forum, Ruth explained she had been moved to create the training after she realised harm was happening to patients because of a lack of basic diabetes knowledge among frontline staff.

She said: “All acute hospitals have safety issues and concerns around diabetes and insulin is one of the highest risk drugs.

“When, as a Diabetes Clinical Lead in a hospital, I attended inquests or looked at the serious untoward incident reports which came my way every month it seemed clear to me that the incidents were often related to things that were avoidable and relatively straight forward.

“I remember attending an untoward incident and thinking what are the 10 top things that go wrong? That’s literally how Diabetes 10 Point Training started.

“We knew staff were overwhelmed and suffering from training fatigue and we didn’t want to overwhelm them with more training that was not going to appear highly relevant to them. So, we thought let’s make it brief, let’s make it relevant, let’s make it hard-hitting.

“I really felt it was possible to prevent harm from occurring. I still feel that it’s not that complicated – we all have a responsibility to know about diabetes.

“It’s not just in the in-patient setting; it’s across health and social care because diabetes is so prevalent, we have a shared responsibility to know about diabetes wherever we work.”

During the podcast, Ruth also discussed her prominent career in diabetes, issues facing those working in the field and her future plans which include delivering training to prisons and detention centres.

Listen to the podcast here.