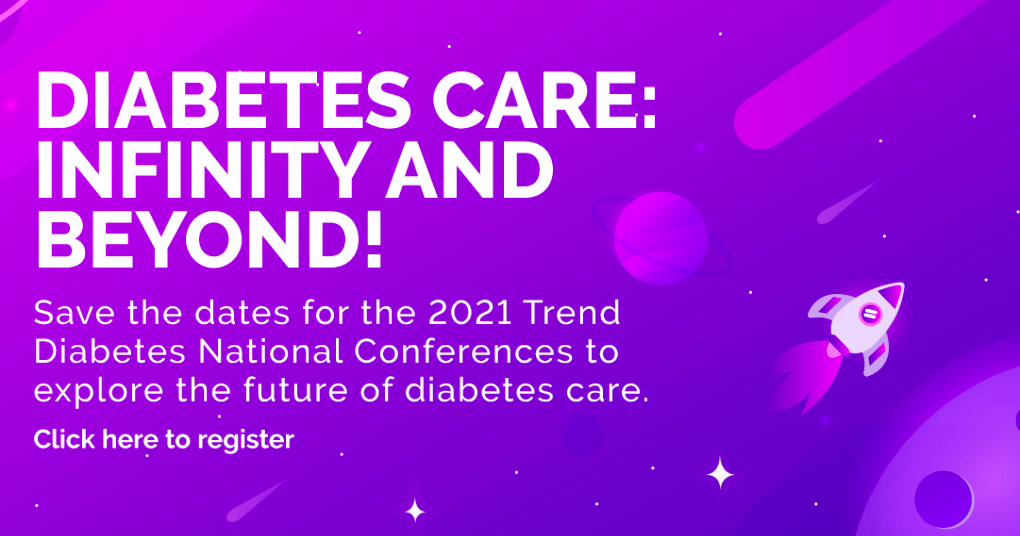 A celebrity diabetes panel and top healthcare experts will form part of the exciting agenda for the next Trend Diabetes conference, organisers have announced.

Entitled ‘Diabetes Care: Infinity and Beyond’, the event will once again be held online in June. The agenda covers subjects such as closed loop systems, new therapies for heart failure and diabetes and how COVID-19 has impacted the nursing world.

Co-Chair and Co-Founder Debbie Hicks will open the conference and greet virtual attendees. She said: “We held our first ever virtual conference last year and it was hugely successful. Although the vaccine is being rolled out fast and restrictions are easing up, we thought we would remain digital in 2021 just to ensure everyone’s safety.

“By going digital, we hope this means more people will be able to join us and take part in some of the exciting presentations and talks we have lined up.”

For the first time there will be a new feature called ‘On the Sofa With Partha Kar’ which will involve the National Specialty Advisor for Diabetes with NHS England and co-lead of Diabetes GIRFT with NHS Improvement leading a discussion with celebrity guests from the world of diabetes.

The first booking is Muhammad Ali who has more than boxing in common with his namesake as he too has made history within the sport. In 2018 he became the first professional boxer in the UK to have type 1 diabetes. He now has his eye firmly set on becoming the first world champion to pick up the title with the condition.

Away from the ring he is also an ambassador for Diabetes UK and is a big fan of the Freestyle Libre which he says helps him to control his blood sugar levels.

He will be joined by fellow sportsman Chris Bright who has lived with type 1 diabetes for 21 years. The semi-pro footballer represented Wales at Futsal in 2016 and a year later he founded the Diabetes Football Community which supports other people who are passionate about football and have diabetes.

The third and final guest is TV and radio digital producer Jen Grieves. She has lived with type 1 diabetes for nearly 25 years and has documented her journey in her blog, across social media and her YouTube channel.

More recently she launched a podcast called Type 1 on 1 which features her interviewing other people who have the autoimmune condition. Already a huge success with two series under her belt, the episodes have been downloaded more than 20,000 times across 80 countries.

Co-Chair and Co-Founder June James said: “We are bringing our exciting content to a laptop near you on Friday, June 11 and Friday, June 18. Join us for live speaker sessions delivered by some of the leading experts from within the field of diabetes. In addition, all delegates will get direct access to representatives via online meetings.

“Any content you miss will be available online for three months so you can watch it at your convenience. Attendees will have the opportunity to ask questions of the live speakers and registration is free. Once signed up, users can access any of the content as soon as it has been broadcast.”