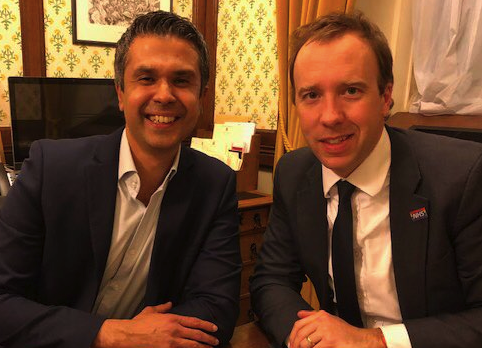 The Health Secretary met with two leading low-carb advocates to discuss the benefits of the diet in preventing, managing and reversing type 2 diabetes.

Dr Aseem Malhotra, Consultant Cardiologist and Professor of Evidence Based Medicine and Dr David Unwin, senior partner of the Norwood Surgery in Southport near Liverpool, were asked to talk to Matt Hancock about their dietary findings.

Dr Malhotra wrote The Pioppi Diet, which largely encourages vegetables, nuts, legumes and fish and avoids red meat, starchy carbs and sweet treats. Dr Unwin is also known as the Low Carb Doctor and has dedicated a lot of time and research to the subject of lifestyle intervention and how ditching carbs can be beneficial to people with diabetes.

Dr Malhotra said on Twitter, together they discussed “dietary misinformation” and how he wanted to start implementing changes in the NHS.

He tweeted: “I explained we have an imbalance in #NHS of too much medicine & not enough lifestyle intervention causing misery to millions. He understands & wants to help fix our broken system.” 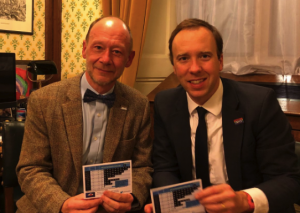 Dr Unwin also tweeted saying that Mr Hancock “exceeded” all his expectations and he received a “warm reception” from the politician.

He added: “Matt completely understood the importance of the glycaemic index in type 2 diabetes.”

After the meeting, Dr Malhotra presented at All Party Parliamentary Group (APPG) for Diabetes, where he told attendees that the cost of type 2 diabetes is now costing the NHS £20 billion a year.

He also unveiled his research findings on the science of understanding heart disease and what lifestyle changes can be implemented to significantly reduce its risk.

On Twitter he said: “Tonight I’ve been talking to @APPG_Diabetes about losing over 100lbs in weight through changing my diet and fitness regime, and how this has made me determined to reverse the epidemic of type 2 diabetes cases.”

Dr Zoe Harcombe, a nutritionist and obesity researcher, introduced her work about different levels of fat and carbohydrates in diets. During her speech, she told listeners that there are “no essential dietary carbohydrates” which is relevant to people with type 2 diabetes because starchy carbs digest down into surprising amounts of glucose as predicted by the glycaemic index.

The award-winning Low Carb Program was also mentioned during the APPG meeting, where several people paid tribute to the initiative saying it helped them treat or prevent their type 2 diabetes.

The meeting was brought to a close by Chair of the APPG Keith Vaz, who said he wanted to ensure type 2 diabetes prevention and the low-carb approach was kept on the “political agenda” in the future.