I seem to have racked up a fair few hospital admissions in my 14 years of living with type 1 diabetes.

Although this is not something that I am proud of (many of these admissions were due to my own lack of diabetes management in my early years), it has made me something of an expert in emergency admissions.

Thankfully, over the last four years, my admissions have reduced greatly and I am no longer a well-known patient within the Accident and Emergency department.

Gone are the days when the staff automatically knew why I was there without needing to ask. I have happily begun to say goodbye to the routine that I came to know so well.

This is a welcome relief to myself and to the hospital, I’m sure! However, with the experience of being a frequently admitted patient come certain expectations on my part.

There were a number of occasions when I found myself in situations where I lost any control of my diabetes, it was taken from me in part of the usual hospital routine.

A part of this issue was due to lack of knowledge around my insulin pump (this is something that I understand and accept – it would be unrealistic for me to expect all health care professionals to understand the ins and outs of each and every insulin pump).

Other times were due to a reluctance to stray from protocol and listen to me as an expert who lives with diabetes 24/7, knowing my body better than anyone else.

As far as my other expectations went, I was proved wrong again and again

I have to say, in the last few years I have feared being admitted to hospital, for numerous reasons including those mentioned, however that changed three weeks ago.

I was admitted on a weekend. Luckily I don’t listen to political spin regarding weekend death rates and I knew that the hospital would be the best place for me to be.

I had tried my very best to avoid the admission but after 10 hours of non-stop vomiting, dehydration and gradually increasing ketones, my stubborn side gave in and off I went in hope of soon feeling the soothing effects of IV fluids and anti-sickness medication.

On admission, one of my expectations proved to be right almost immediately as no one knew what Gastroparesis was or what it meant for me as a diabetic.

This is something that I have come across plenty of times in the past and I am happy to supply as much information as necessary to build a better picture of what we should all expect.

I was, however, lucky in that I was at the stage where I was well enough to explain the issue, and I do wonder what would happen if this was not the case.

However, as far as my other expectations went, I was proved wrong again and again.

Expectation number two was that my control would be removed once I was admitted.

It’s hard to articulate the fear that comes with having an important part of your health taken over by strangers, and in the past this has been one reason that I have put off going to hospital in an emergency.

As patients with long term conditions, we need to place a lot of faith in healthcare professionals and certain experiences can have a lasting and profound effect on how we seek care in the future.

I’m pleased to say that the experience I received in terms of maintaining control of my diabetes was a very positive one.

From the word go I made it clear that I would be altering my insulin doses and that I was more than able to do so. I was firm in my approach (perhaps due to fear of losing my control) but understanding in that if I was unable to manage my pump, then other options wold need to be considered.

This was such a plus for me and I felt it contributed to a much calmer and less anxious admission than I had previously experienced.

Expectation number three was that no one from the diabetes team would be at the hospital at 8:00pm on a Saturday. 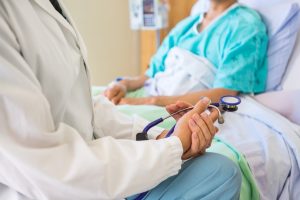 Ninjabetic says her recent hospital expectations have been exceeded

I felt that I received a very personalised experience when she

Again, this was dashed as the friendly and familiar face of a doctor who I have seen numerous times around the diabetes department and at conferences popped in to see me.

This was in around 15-20 minutes of arriving in A&E and it was a huge relief to know that she was on hand should I need her.

mentioned that she had recognised my name (despite us only being passing faces in the past) and came straight in to check on me.

She knew that I used an insulin pump and respected my wishes to continue using it unless it was necessary to move to a sliding scale.

I’m sure this was as reassuring for the staff as it was for me! She was friendly, attentive and most importantly she was respectful of my knowledge.

Another bonus was seeing the friendly face of my previous diabetes consultant at 8am the next morning! Yep, consultants do work on weekends!

His early morning ward round was very welcome, and before being discharged I felt pleased that someone who knew my condition and my history inside out was able to give me the green-light. Reassurance is key here. Having experts in my condition on hand provides me with that reassurance.

Expectation number four was that my voice would not be heard by all. Even after 14 years with type 1 and being an expert in admissions, I feel that I am only just finding my confidence to speak up during emergency situations.

Quite often discussions are steered in certain directions by healthcare professionals and in the past I haven’t had the courage to tell people what works for me.

I still worry the knowledge I have regarding my condition and my care options will be overlooked in favour of “this is the way it has always been done”.

To combat this I tried, as much as possible, to take control of discussions and to make my presence as strong as possible. I was the star of the show if you like, and I made sure it stayed that way.

I told the staff everything they would need to know and I pre-empted outcomes based on my knowledge of the gastroparesis and diabetes combination.

I told them about my individual diabetes management, which wouldn’t be reflected on their sliding scale protocol, and I ensured that it was clear that I knew what I was talking about.

I did my best to promote the expert patient in me, even though I was feeling utterly exhausted, with the intention of being as involved in my care as possible.

The key was to be confident, to be sure of what I was saying and importantly to ensure that I was being understood.

I am pleased to say that my expert patient status was respected at all times and it made for a pleasant (or as pleasant as a marathon vomiting session can be) experience.

Was I disappointed that my expectations were dashed? Not at all! There are many things that I come to expect from my care; compassion, competence, honesty, but not once have I ever felt that I should expect to be misunderstood, unheard or forgotten.

I was more than happy to be proved wrong by the care that was provided on this occasion and long may it continue and develop from here.