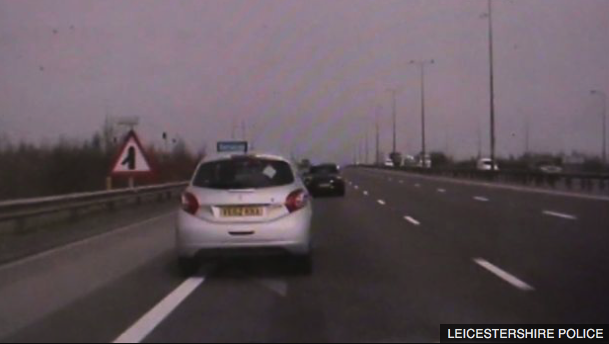 A woman who had a hypo and passed out while driving on a motorway with her baby in the car was safely forced off the road by the police.

PC Daniel Pattison responded to reports of a Peugeot swerving and colliding with the central reservation on the M1 in Leicestershire.

The incident comes just weeks before Hypo Awareness Week, which is an annual campaign that started on Monday, October 3, and was created to raise awareness of hypoglycaemia in the UK.

Speaking to the Leicester Mercury newspaper he said: “I pulled up alongside and saw the woman with her head completely back, staring at the roof of the car – she was out.

“Then I saw the child in the back. I thought, ‘This is going to end up with her and the baby getting killed’, so I ran through in my head all the options I had.”

The 34-year-old female driver – who did not want to be named – told the BBC she was grateful to the police for their help.

She said: “Had it not been for the actions of the officers bringing my car to a stop, I dread to think what the outcome may have been or how many people could have been involved in a potentially fatal accident. When I was told exactly what had happened I was very emotional.”

Danny put himself at risk and prevented a potentially serious accident from happening. We’re proud of him and he should be too

Footage has been released of the incident which saw PC Pattison eventually stop the car on the side of the motorway with both mother and baby unharmed.

He has now been given a Chief Constable’s Commendation and call takers Alex Kimber and Steve Bates also received awards for their help.

Chief Constable Simon Cole said: “Danny put himself at risk and prevented a potentially serious accident from happening. We’re proud of him and he should be too.”