The winners of this year’s Celebrating DESMOND Awards have been unveiled during a ceremony at the Leicester Diabetes Centre.

Five prizes were handed out to reward good practice and excellence among those who deliver the structured education across the country.

The Innovation prize went to the Brent Integrated Diabetes Service at the London NW Health Care for their work within the black, asian and minority ethnic (BAME) communities.

Congratulations to all the winners. Not only do the awards recognise those who work hard to improve the lives of people who have type 2 diabetes, but it also provides a unique opportunity to share and showcase good practice.

The identified that BAME communities in North West London were asking for more dietary information relating to food they recognised and advice in a format they could easily understand. The NWL addressed this by collaborating with Carbs & Cals to create a resource to address the longstanding problems that was hindering education and self-management in those specific communities.

The Brent diabetes team now use the visual resource to assist their patient learning in all their DESMOND sessions. 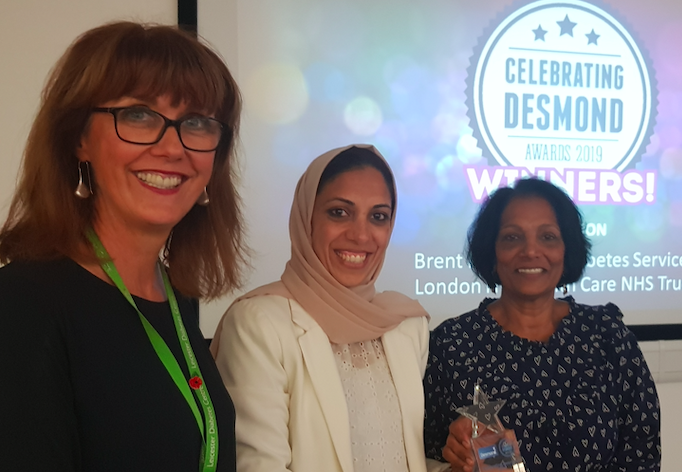 A second Innovation award was also given out to the North Cumbria University Hospital NHS Trust which has launched The Injectable Toolkit Programme. This supports practices in the care of people with complex health complaints to help them achieve their individual glycaemic control targets.

It promotes self-management based on current research theories and philosophy. The team started it in 2016 and so far more than 200 people have completed the course.

Northern Ireland’s Northern Health and Social Care Trust was presented with the Excellence Award. They were singled out for improving the referral process and the results spoke for themself. In July 2017 their attendance rate was 38 per cent, a year later it rose to 59.12 per cent and at the end of June 2019, it was 86.64% per cent.

The Team of the Year award was presented to the Bedford Hospital NHS Trust for introducing several initiatives which have helped promote the benefits of DESMOND. They also helped develop a webinar for practice nurses and GPs to access.

This was aimed at showing healthcare professionals how and why they should encourage attendance their sessions.  The webinar included evidence around barriers to attendance and how these can be reduced.

Nurjahan Selant, from the Lancashire Care NHS Foundation Trust, picked up the Educator of the Year trophy. Her colleagues nominated her saying she “deserves the recognition for her commitment, enthusiasm and support for our DESMOND Team”.

Launched in 2014 to reward the efforts of DESMOND teams across the country, the awards programme has got bigger and better each year.

DESMOND Director Bernie Stribling said: “Congratulations to all the winners. Not only do the awards recognise those who work hard to improve the lives of people who have type 2 diabetes, but it also provides a unique opportunity to share and showcase good practice.

“As well as rewarding excellence, the awards are an opportunity to promote engagement and encourage DESMOND teams to ensure key learning is disseminated across our community.”