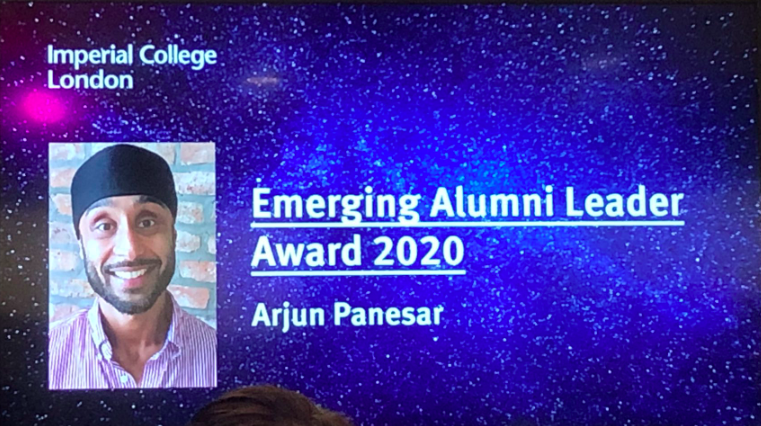 A founder of one of the world’s leading digital healthcare companies has been recognised for his contribution and impact on society at a top awards ceremony.

The awards recognise and celebrate alumni under the age of 40, who are remarkable leaders in their field, have demonstrated outstanding achievements or have made a substantial impact on society. 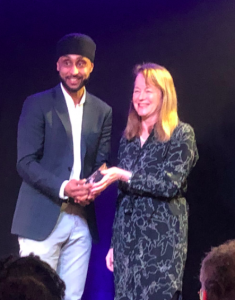 Arj picking up his award at the ceremony

DDM grew out of the online forum Diabetes.co.uk that set up in 2003 after Arj’s grandfather was diagnosed with type 2 diabetes and was looking for information about how to best manage his condition.

At this point, Arj was in the first year of his MEng Computing (Artificial Intelligence) at Imperial.

He said: “When my Granddad asked me about his type 2 diabetes diagnosis, I said, ‘I’ve got no idea, why don’t we ask the internet?’’ And that’s how Diabetes.co.uk was born. It was the world’s first digital community for people with diabetes.

“Back in the day, it was just called a forum. Our services really predate digital health.”

Diabetes.co.uk is now the world’s largest and most active community for people with diabetes and the scale of the online community is what has enabled Arj and the DDM team to develop their digital health technology.

It was data generated by the forum community that helped form the Low Carb Program and the Hypo Program, along with several other digital health platforms and apps.

Arj said: “It’s been a really interesting journey, because that data that we’ve been generating has allowed us to see the concerns of the diabetes community.

“Because we’re collecting data at this scale, we have an unrivalled insight into what those concerns are. We then provide solutions that address those concerns and that’s how we’ve created all our digital health technology to date. Real-world evidence meets clinical validation.”

He was recognised at a glittering awards ceremony in London alongside other innovators, including an alumna whose research in the field of Planetary Science was influential in NASA’s decision to send a new mission to Jupiter’s moon Europa.