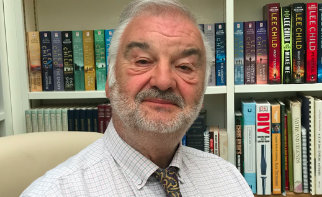 A professor named a ‘world expert’ in diabetes and older people has marked his 70th birthday by continuing to fly the flag for the “silent majority”.

Professor Alan Sinclair says retirement is far from his thoughts and has said he has a lot more to achieve in raising the standards of care for older people and further establishing frailty as a prognostic clinical complication of diabetes.

Professor Sinclair is the Director of the Foundation for Diabetes Research in Older People (fDROP) and Visiting Chair in Diabetes Care at King’s College, London.

I feel older people with diabetes and those with frailty are often overlooked and at times, with such prevalence of type 2 diabetes within this group, are like the silent majority of diabetes. Professor Alan Sinclair

Over the last 18 months, Professor Sinclair has led a large national multi-professional stakeholder group to produce the Strategic Document of Diabetes Care for the National Advisory Panel on Care Home Diabetes (NAPCHD). This has provided a modern multiprofessional platform for enhancing diabetes care within these settings.

In 2021, the DT reported on Professor Sinclair being listed in the top 0.1% of scholars writing about older people over the last decade by Expertscape.

Professor Sinclair said: “I am as passionate and committed as ever to the fields of diabetes, older people and frailty. I feel older people with diabetes and those with frailty are often overlooked and at times, with such prevalence of type 2 diabetes within this group, are like the silent majority of diabetes. This area has been my specialism throughout my career and I have plenty more research projects I want to pursue before I even think about retirement.”

Professor Sinclair continues his record of producing one published article per month spanning back more than 10 years, with several recent and accepted articles in Lancet, D&E and BMJ journals.

He is a World Health Organization-recognised expert in diabetes and was the first to be appointed by the Department of Health to the position of National Clinical Lead for Diabetes in Older People.

After leading the first National Diabetes Audit in Care Homes, he went on to collaborate with Diabetes UK and Trend Diabetes to develop End of Life Diabetes Care guidance.

DT Editor Oliver Jelley said: “Professor Sinclair is highly compassionate individual and continues to maintain his profile as a national and world leader in diabetes care in older people.”