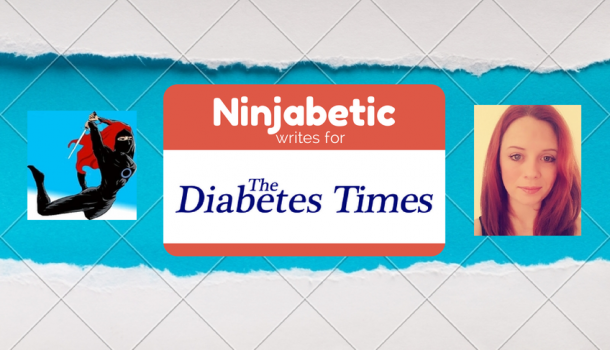 NINJABETIC – Going offline is good for the soul

It’s difficult to put into words how joining the Diabetes Online Community made me feel six years ago. I was welcomed into a small, but vibrant community, filled with kind and caring people whose common interests were to share, support and help other people with diabetes. I’m pleased to say that this continues today, and it has been wonderful to watch the community grow so quickly into a huge family of supporters.

I very quickly found I was a part of something big and that felt really good. I had never felt needed or wanted before, or that I had that “special something” which helped me to belong, but living with type 1 diabetes seemed to give me that. I felt at home in the community and it was wonderful to finally feel like I mattered. It actually came as quite a surprise to me as, previously diabetes had always been a drag, it was unwanted and I had always felt that it held me back. However, being a part of the community showed me that diabetes could give me wonderful friendships and opportunities. This was a much needed change of perspective on my part.

Soon I started being invited to all sorts of meetings, to talk at patient, professional, charity and pharma conferences, to be involved with a number of local and national projects, to write for national newspapers and medical journals and to be consulted on the birth and development of new and existing diabetes technologies – all of which were (and still are) a great honour!

I found it difficult to believe that people wanted to fly me across the globe to talk about my experience of living with diabetes, but I continued to go with the flow and found myself saying yes to anything and everything that came my way. I would try my hardest to rearrange my life in order to do anything that would help the patient voice be heard among the louder voices which, in the past, had spoken for us instead of with us.

I felt lucky I had flexibility and lack of commitment in my life to be able to up and leave at the drop of a hat, and I became an expert at the art of nailing a presentation off the cuff due to the short notice I was often given. My confidence in myself grew bigger than it ever had as I was faced with hundreds of people looking up at me on stage, listening to my story which I seemed to recite hundreds of times over.

Another aspect, and probably the greatest in the first five years, was having a social media presence. I would joke that my phone and tablet acted as another limb as I scrolled endlessly through tweets, trying to reply to as many as I could in between jobs, social events, meals and my precious rest and relaxation time. I soon found that I had started to give up activities that I had taken part in previously in favour of being online as Ninjabetic, and this was something that I really enjoyed. But how much was too much?

My friends would comment that I was always online and never really in the room, even when I was with them. My boss would walk behind me at my desk, too fast for me to shut down my notification window, and would once again tell me to get off Twitter or Facebook and get on with editing. My sleep would be broken and I would wake exhausted as I would check multiple social media platforms intermittently during the night. I also learned a important lesson, there are some who would only value what I could do for their own self-promotion far more than they valued me as a person, and this soon became apparent as I stepped away to self-care.

It seemed I had a fairly large social media presence, but I had little presence offline. I had forgotten what it was like to live outside of the screen.

Last August, like a switch turning off, I stopped almost everything I had done online previously. I have to say that writing for the Diabetes Times has been my only consistent social media presence. I suddenly realised how exhausted I was from social media and how, instead of using it as a platform to help me with my diabetes, I had taken on the role of doing far more than one person could manage alone. I can’t describe the feeling of burn-out that I experienced by saying yes to every meeting, every talk and every event. It had caught up with me so suddenly and I realised how very tired I was from it all.

I knew that I still hugely appreciated every opportunity that had come my way and every aspect of social media that had helped me to gain control of my diabetes, but sadly I had become so involved in my online presence that I had forgotten about myself. My HbA1c had slipped, my diabetes management had taken a back seat and my offline relationships had taken a tumble.

I felt hypocritical for advocating better diabetes self-management when I was too busy doing to look after myself. The lack of commitment in my life no longer meant that I enjoyed the freedom to up and leave as and when I wanted. Instead I felt unstable in my future and my long-term goals. I think my biggest learning curve actually came five years ago when my ophthalmologist told me that I’d be blind within the year. I hadn’t realised it at the time but instead of looking up from my many screens and taking in the beautiful world around me, I was simply posting images and content that didn’t reflect what could have been my beautiful life.

I didn’t want that to continue because I knew how powerful social media could be in helping me again when the time was right, so I made the decision to take a back seat and to put it down until I was strong enough to pick it up again. Not only that, but I needed to take time (a lot of time it would seem) to reflect on where I had gone so wrong and to teach myself that by saying yes I’m not always doing what’s best for me.

Last week I accidently fell back into social media (Twitter to be exact) in sad, but in a strange way motivating, circumstances. It was the first time in the 11 months that I have been on and off with social media that I felt a sense of wanting to rejoin the community in some way and to start enjoying it again for what it is; a much larger but still caring, supportive and helpful community that I was welcomed into six years ago.