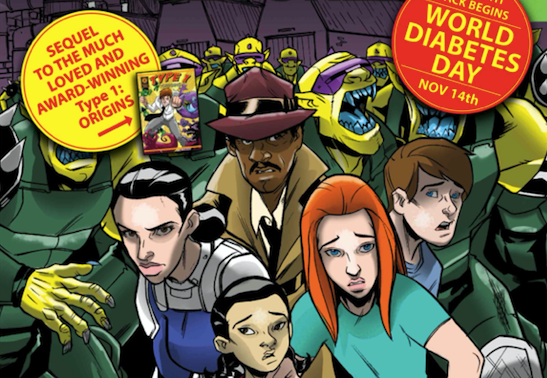 A follow-up to a comic that was launched by two leading diabetes consultants to help educate people about type 1 diabetes is being released.

Type 1: Attack of the Ketones is the sequel to Type 1: Origins, which was based on the title of hit Marvel series Wolverine: Origins and will be released on November 14, which is World Diabetes Day.

It will be available to read online for free on the Revolve website, which designed the publication.

The idea of the comic series was developed by Dr Partha Kar, of Portsmouth Hospitals NHS Trust, Dr Mayank Patel, of University Hospital Southampton NHS Foundation Trust, and a group of people with the condition.

The first title told the story of a young man, Gary, who comes to terms with his diagnosis and his ‘special powers’ of shock, surprise, acceptance and understanding of how he will cope.

Dr Patel said: “We had some great responses to the first comic. We found it was a really great way to inform and educate young people with type 1 diabetes, as well as those who are around them.

“We have found that many people get confused about the two different types of diabetes, and as a group, people with type 1 diabetes can therefore feel excluded and are forced to deal with ignorance about their disease on a regular basis.

“This can be hugely frustrating and the hope is, that these comic books will provide another means of spreading the type 1 diabetes message through art and that the story will inform and educate anyone who reads it.”