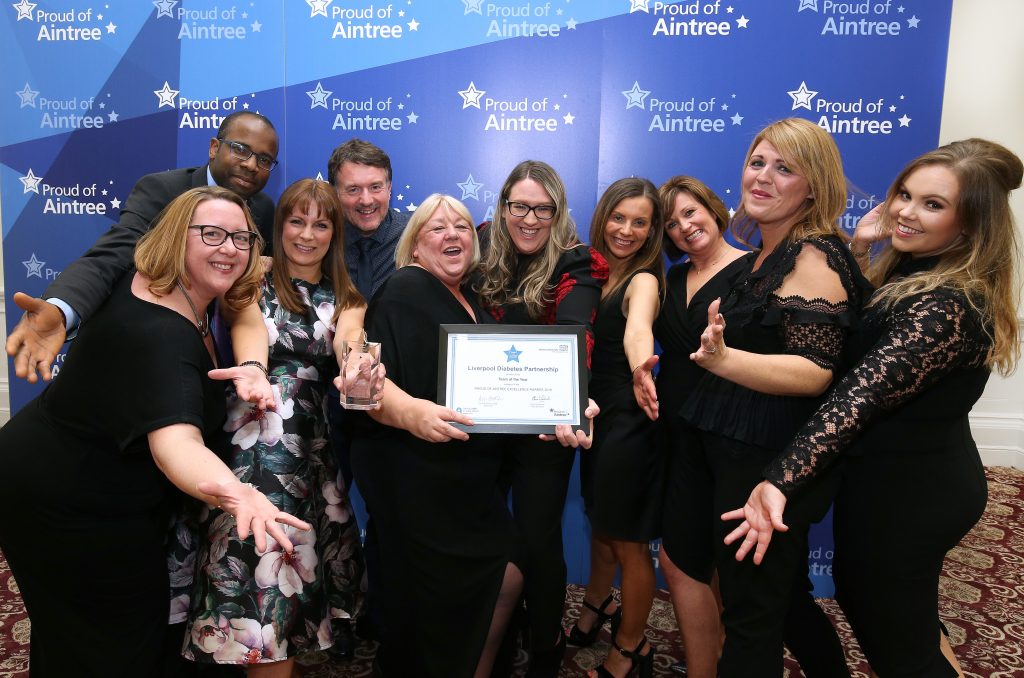 By Editor
Cheshire and Merseyside

It’s high-fives all round for a Liverpool diabetes service celebrating its fifth prestigious accolade this year for raising awareness of complications associated with the condition.

The team, made up of nurses, consultants, dieticians, podiatrists, health care assistants and administrative supports staff,at the Liverpool Diabetes Partnership have landed a raft of awards for their work to improve services for people with diabetes across the city.

The team’s “significant” campaign during Hypo Awareness Week saw them pickup an Excellence Award at the Quality in Care Diabetes Awards, fending off competition from 22 other entrants to be named joint winners with NHS Tayside.

We work tirelessly to make improvements to people with diabetes and are always looking forward at how best we can reach our patients.We are excited to see what 2019 brings. Vicki Alabraba, Diabetes Specialist Nurse

Judges praised the team for taking the campaign, to raise awareness of hypoglycaemic attacks in people with diabetes, out to the wider community by attending a student freshers’ fair at the city’s Echo Arena and using a ‘hypo’ simulation head set.

‘Hypos’ or hypoglycaemic attacks, happen when glucose in the blood falls to a low level. Symptoms include drowsiness, sweating, trembling, hunger, confusion and unconsciousness.

Earlier this year, the integrated community diabetes team was rated outstanding following an assessment by the national clinical director for obesity and diabetes at NHS England.

Further work to improve links with Muslim, Arabic and Polish communities was declared an “outstanding contribution to equality, diversity and inclusion in health and social care” and saw them pick up a trophy at the Royal College of Nursing North West Black History Month Awards.

On top of this, the team was awarded the Divisional Award for Medicine at the Proud of Aintree Excellence Awards, where Juliette Palmer was also named Innovator of the Year for her on-going work to improve access to diabetes care for homeless people. The team’s work to improve the care for people with diabetes who have complex needs or are hard to reach, also gained the team the title of ‘Team of the Year.’

Vicki Alabraba, Diabetes Specialist Nurse, at the Liverpool Diabetes Partnershipsaid: “I think it’s safe to say that 2018 has been an amazing year for us and as a team we are so proud that ourhard work has been recognised.

“We work tirelessly to make improvements to people with diabetes and are always looking forward at how best we can reach our patients.We are excited to see what 2019 brings.”