People living thousands of miles from Leicester have received crucial education from city researchers to help drive them to effectively self-manage their type 2 diabetes.

A team from the Leicester Diabetes Centre – led by Director Professor Melanie Davies CBE – have just returned after travelling to Mozambique to discuss potentially rolling out a specially adapted education programme there.

Type 2 diabetes, a condition commonly associated with unhealthy lifestyles, is a serious health risk that is increasingly affecting poor countries. This is because people’s lifestyles are becoming more sedentary and are moving away from traditional foods and diets.

As the threat of the condition grows, the need for education and awareness becomes more vital. The Leicester research team in collaboration with colleagues from Geneva, interviewed patients, educators, clinicians and policy makers to discuss the most effective way to target the very poor and vulnerable. They urgently need help to manage their condition, before they develop serious related complications. 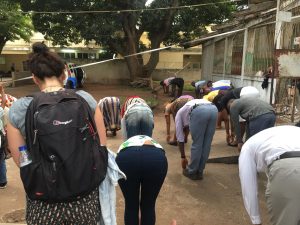 Following her visit, she said: “It was such a rewarding experience to interview the participants and stakeholders and capture their positive feedback about the DESMOND programme. It is still early days, but the acceptability of diabetes education is clear in this population.”

Professor Davies, Professor of Diabetes Medicine at the University of Leicester, said: “Globally, the number of people with type 2 diabetes is increasing with approximately 415 million people currently living with the condition. It’s thought 80 per cent of that figure are people who live in low-to-middle income countries.

“These countries don’t have the financial resources or infrastructure to effectively manage this increasing patient population, specifically as they are already stretched dealing with the infectious diseases that are also common such as human immunodeficiency virus (HIV) and Tuberculosis (TB). Therefore, there is a great need for inexpensive, but effective treatment options.”

To tackle this problem, the Diabetes Education and Self-Management for Ongoing and Newly Diagnosed (DESMOND) programme, which was developed by the Leicester Diabetes Centre, has been culturally and linguistically adapted so it can be effectively delivered in these countries.

Professor Davies, also Director of the NIHR Leicester Biomedical Research Centre and a Diabetes Consultant at Leicester’s Hospitals, added: “DESMOND has been scientifically proven to improve well-being, adherence to medication, and weight loss amongst other positive outcomes.

“It is currently delivered in more than 100 sites in the UK and is also used in Ireland, Australia and Qatar. But, to date it has not been tested in poorer countries, so this provides us with a wonderful opportunity to learn and understand how we may be able to specifically tailor the programme, adapt it and make it available for other countries around the world too.”

The aim is to recruit African volunteering patients to take part in the programme and collect data on their progress as well as their opinions and experience. This has been achieved and the final visits are now scheduled for October this year.

The findings will then be used to develop a structured education programme adaption toolkit which can be used by other organisations around the world, to support patients globally in effectively self-managing their diabetes.

The Leicester Diabetes Centre is an international centre of excellence in diabetes research, education and innovation led by Professor Davies and Professor Kamlesh Khunti.