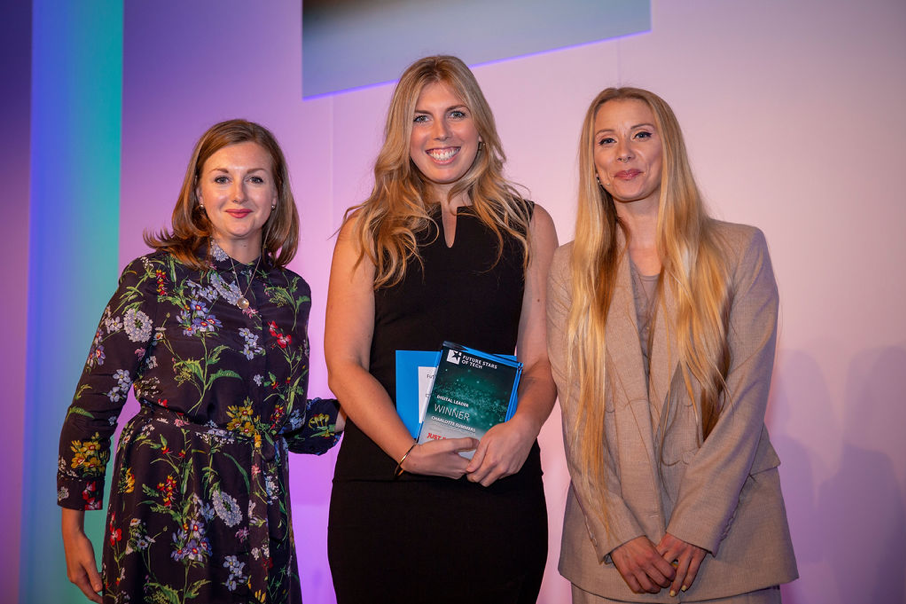 The Chief Operating Officer of Diabetes Digital Media has won a prestigious award.

Charlotte Summers has been awarded the prestigious 2019 Future Stars of Tech Award for Digital Leader. This award aims to recognise an entrepreneurial woman who has contributed to a successful digital transformation initiative and been in the tech industry for less than five years.

Speaking of her recent award, Charlotte said: “I am delighted to have been awarded this prestigious Future Stars Award for Digital Leader, particularly since I was up against seven other talented nominees. I’d like to thank my fellow colleagues at Diabetes Digital Media (DDM), who have supported, encouraged and inspired me along the way to pursue my passions in creating and delivering digital education programmes which result in behavioural change, proven health outcomes and cost savings.”

I’d like to thank my fellow colleagues… who have supported, encouraged and inspired me… to pursue my passions in creating and delivering digital education programmes which result in behavioural change, proven health outcomes and cost saving. Charlotte Summers

Charlotte was up against seven other high-flying, entrepreneurial young women, including Verena Paprik, Chief Marketing Officer at UK-headquartered MusicGIF network TuneMoj who is listed on Forbes 30 Under 30.

Charlotte is a published clinical author and expert in digital health interventions and behavioural change/psychology. She is also Chief Operating Officer and the driving force behind DDM, based at the University of Warwick Science Park.

Starting out in 2003 as Diabetes.co.uk, the world’s first peer-to-peer online support community for people with diabetes, DDM has evolved to become Europe’s largest and most engaged diabetes community, providing peer-to-peer support, information, and education to over 40 million users annually. Charlotte’s focus lies in creating and delivering digital education programs with proven health outcomes and cost savings. Her passion lies in creating offline accountability and behavioural change in a digital age.

In 2015, she was responsible for the launch of the award-winning Low Carb Program. So far over 416,000 people have downloaded the program which shows people how to lose weight, reduce their HbA1c, become active and in some cases put type 2 diabetes in remission. Charlotte continuously drives this project forward, and in 2018, the Low Carb Program secured QISMET and CE accreditation, meeting all the requirements for delivery within the NHS. A three-year study following the one-year outcomes of 1,000 people for type 2 diabetes, prediabetes and general wellbeing is published in the Journal of Medical Internet Research Diabetes, an industry leading diabetes journal.

At just 29 years old, she has been accredited with a number of accolades and this Future Stars award adds to a growing list. She has also been named as a disruptor in the Sunday Times Maserati 100 List 2017, finalist for the First Women of Healthcare from First Women Awards and one of Management Today’s “35 Women Under 35”. Charlotte was also a winner alongside colleague Arjun Panesar in the 2018 NatWest Great British Entrepreneur Awards.

She holds a BSc Hons degree in Psychology and has been part of the DDM team since 2012. Charlotte manages operations as well as implementing persuasive methods to improve optimisation. She directs, co-ordinates and oversees marketing, editorial and web development teams, manages public relations, community development projects and human resources. Charlotte assisted in growing the market-leading community to over 103m page views by 24.7m users in 2017, and over 29.8m page views by 6.9m users from January to March 2018 alone.

Last year (2018), Charlotte co-authored a paper, ‘Outcomes of a Digitally Delivered Low-Carbohydrate Type 2 Diabetes Self-Management Program: 1-Year Results of a Single-Arm Longitudinal Study’, alongside Dr Laura Saslow (Assistant Professor University of Michigan School of Nursing) and Dr David Unwin (NHS Innovator of the Year 2016). This paper has been published in the Journal of Medical Internet Research and has proven that a low carb diet is effective in improving the health of people with type 2 diabetes and in many cases putting it into remission.

Charlotte is a regular speaker at industry seminars and conferences, specifically about the future of diabetes and wider healthcare education. She has previously spoken at Low Carb Breckenridgein Colorado on ‘180,000 anecdotes: The Low Carb Program’ and at the Diabetes Professional Care Conference on ‘Play Your Carbs Right’. More recently, she was a guest speaker at the ’39th Annual Meeting & Scientific Sessions’ hosted by the Society of Behavioural Medicine in New Orleans, PHC structures for Optoelectronics in London and Web Summit in Lisbon Portugal.