A major diabetes conference received record attendance numbers this week as healthcare professionals from across the UK gathered to discuss diabetes care and share good practice.

Only in its third year, more than 3,000 people attended the CPD-accredited Diabetes Professional Care conference (DPC2017) which took place at Olympia London.

Over the course of the two-day event, delegates were able to attend presentations and workshops on a variety of topics, such as the childhood obesity strategy, type 2 diabetes reversal and diabetes burnouts.

DPC founder Maggie Meer said: “DPC has gone from strength to strength and this year was definitely bigger and better than ever. We’ve hugely proud to have attracted more than 3,000 people as we’ve only been going for three years, so it just goes to show there was a huge need among healthcare professionals in what we provide. The feedback we’ve had so far from attendees was that DPC provides an excellent platform for healthcare professionals to share good practice and to showcase innovation within the field of diabetes.

“Our goal is to ensure that Diabetes Professional Care are underpinned by a key characteristic – that we really listen to our stakeholders to ensure that both they and the people they care for are the true benefactors. We firmly believe this is exactly what we’ve achieved every year since we launched and we will continue to do so.”

On Wednesday proceedings began with a keynote speech from Dr Partha Kar and Professor Jonathan Valabhji, clinical directors at NHS England, who examined the digital transformation of our health services. 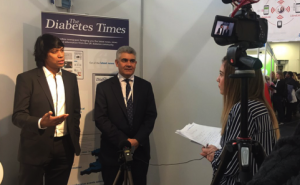 Later that day, Dr Anna Brackenridge, consultant in diabetes at Guy’s and St. Thomas’ hospital, highlighted the benefits her type 1 diabetes patients had had with the FreeStyle Libre, and Dr Joseph Wherton, a senior researcher at the University of Oxford, spoke about how virtual consultations can benefit diabetes management.

Of foremost interest was the defence of the government’s much-maligned childhood obesity strategy. Richard Sangster, the head of obesity policy at the Department of Health, also spoke on Wednesday and admitted the strategy fell short in several areas, while Dr Alison Tedstone, chief nutritionist at Public Health England (PHE), acknowledged on Thursday, that “this has been criticised by non-government organisations… but Downing Street really cares about it”.

Elsewhere, there were extremely positive discussions regarding type 2 diabetes, specifically, reversing the condition. Professor Mike Trenell, chief scientific officer at Changing Health, insisted the message needs to change: type 2 diabetes is not a progressive, chronic condition, rather one that can be treated and put into remission.

The psychological impact of diabetes was also discussed in detail, particularly the differences between depression and diabetes burnout.

“It’s been there for years, but no one has done anything about it,” said Debbie Hicks, a co-chair of TREND UK and a diabetes nurse consultant at Enfield Health, who revealed she twice suffered from diabetes burnout, also known as diabetes distress, but says not one healthcare professional was able to help her.

Professor Cathy Lloyd, professor of health studies at the Open University, then spoke about why screening for depression is of the utmost importance within the South Asian community. A past study on people in Birmingham uncovered that South Asians are up to six times more likely to have diabetes, and those with existing diabetes have higher levels of depression compared to white Europeans with the condition.

There was also a humorous, insightful workshop from Diabetes.co.uk entitled ‘Play your Carbs Right’ where the sugar content in foods was compared to reveal just how sugary some so-called healthy foods actually are. During the workshop they also discussed the huge impact the forum’s Low Carb Program has had on people since it was launched.